The dress is a stunning blush-pink Monique Lhuillier, featuring the increasingly trendy sheer panel overlay and iridescent beading. Platform metallic pumps and shoulder-grazing drop earrings complete the outfit but not the look….in my opinion.  This much sparkle and bling on a dress renders the shoulder drop earrings redundant and unnecessary.  A simple stud of the diamond persuasion would have sufficed.  My biggest issue with this look is not the gown or the baubles….but the hair and make up; or lack there of.  This Lhuillier piece demands a sleek and simple up do of any sort, a bun, or a top-knot similar to the  last Lhuillier donned by Flotus.  Oh well, she gets it right 99.9% of the time, and by my own admission…the Potus IS her best accessory anyway!

The 36th Annual Kennedy Center Look did shine bright on The First Lady, color is her strength and she should stick with it!

Most bloggers and journalist are a buzz today regarding the 2012 class of Kennedy Center Honoree’s, like Dustin Hoffman, David Letterman and Buddy Guy .  But not I, the First Hostess aka Michelle Obama and her arm-candy…you may call him The President, were  the showstopper in my humble opinion.

Michelle Obama chose this stunning, gold lame chiffon gown, with a crystal encrusted neckline and high-waisted bodice, classic FLOTUS style. I am a huge fan of gold on deep complexions, but an even greater fan of cool, bright tones such as that lavender, Grecian number she donned at her 2009 first lady debut at the honors gala.

In 2010 & 2011 again, The FLOTUS continued her winning style with by sticking with the palate that compliment darker skin,such as this blue Vera Wang strap-less tulle gown, with accentuating bias drape, layered skirt with feathered organza accents.  Or the form-fitting, deep burgundy number with the nude lining…no wonder POTUS is smiling so hard, wouldn’t you??

And with the  re-election of Michelle’s ‘ Arm Candy In Chief ‘, I hope the next four years of Kennedy Center gowns are as impressive as the last four.

….other Michael Kors notables, this very sexy hot pink sheath Michelle wore to the White House Correspondence dinner.  This look has become her signature look, along with kitten heels and sparkly broaches.  This time FLOTUS chose to kick it up a notch for her evening look by adding this gorgeous flower necklace. 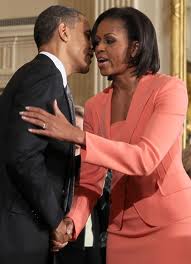 The First Lady also chose a Michael Kors design for her official White House portrait.  The choice to go sleeveless attracted its share of controversy from those who thought the perception of arm pit was inappropriate and more than they could handle.  My opinion, if I had those biceps, I wouldn’t own sleeves at all. 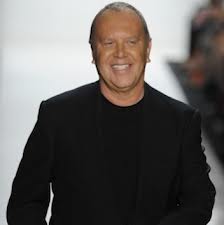 Michael Kors, The American designer most known for his quick wit and devilish charm as a Project Runway Judge, launched his label 31 years ago and hasn’t looked back,  The designer says he was thrilled to see the First Lady sporting his design on one of the most important nights of her life. ”Mrs. Obama looked chic and elegant as always on election night,” says Kors “My dress, with its strong color, clean lines and feminine silhouette, has all the elements that have become a part of the trademark style of our First Lady.” Agreed, and with a second term as FLOTUS  underway, Mrs. Obama just might out icon Mrs. Kennedy….but i’m not trying to start anything, just sayin’