Derek Jae and I had a quaint little chat during the 2010 Bronner Bros. Mid-summer hair show in Atlanta Ga.

In case you live under a rock, your cable’s off or your gossip game is late; allow me to familiarize you with the Star of Chris Rock’s hit movie, ‘Good Hair’ and the Real Housewives of Atlanta resident stylist to the lively Kim Zolciak.

The funny thing about interviewing Derek Jae,  in all his glory, including canary yellow britches with five-inch, electric blue pumps (with what looked like peacock feathers and rhinestone affixed to the heel); was that he was so humble and kind that his personality took center stage, Not his costume.

I must preface this post by stating that,  yes,  I am an avid viewer of Real Housewives of Atlanta,  but let out an audible gasp when Derek first pranced across my screen all done up like Little Bo Peep in pumps; I had a very negative reaction.  My reaction was due in part to the proliferation of extremely gay men, particularly, black men being portrayed as more of a caricature than a character on ‘Reality TV’….but I digress. 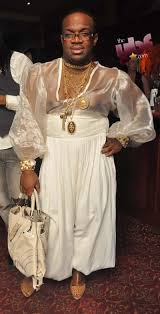 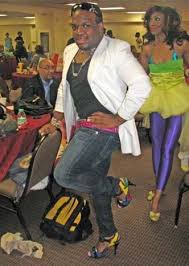 I confess,  I did approach Derek with a slight bias;  however, I was more interested in his meteoric rise to the ‘D-list’ (which is the new ‘A-list‘,  you apparently you have to believe in  Scientology to get on the ‘A- list‘ anyway..lol).

Derek Jae’s story began in Ohio watching  his aunt transform women from flat to fabulous as a kitchen beautician.  He spoke about being mesmerized by something as simple as a hairstyle affecting a women’s personality both physically and psychologically, with the spin of the styling chair.  I definitely understand that feeling, its like going from Barry to Beyoncé in a poof.

It was in those moments,   where Derek witnessed one transformation after another, that inspired him to take up the ‘hair’ mantle and run with it.  And other than his brief interlude with fashion, (Bauder College’s fashion merchandising program), he had taken the first step  to a career as a hairstylist.

After graduating from the now defunct Herron’s Beauty Academy in Toledo, Derek Jae realized that he needed to polish his styling skills so he used his best girlfriend Patrice, as his guinea pig…bless her heart…my mother was my Patrice..lol.

Evident in his answer to ‘Who is your Muse‘?  Derek’s response, …”LIFE …..life is my muse.”  “I am doing everything I want to do and I am having a wonderful time”, and If body language is any indication of one’s overall state of being….I may as well have been interviewing him while lying on the deck of some fabulous yacht sipping ‘champagne’ in  St.Tropez.

The reason he is loving his life right now is due to his affinity to the beauty industry…”it allows me to be myself” sigh’s Derek in his Diva-esque tone. Now how many people can say that about their job?,  i’m waiting ().

I concluded  the interview by asking, “Who are your industry favorites?”, I was shocked and delighted by his answer.

Of course,  Kimberly Kimble and  Tippi Shorter were mentioned, they’re on every stylist’s with similar ambitions’ short list.  Other than ‘life‘, I think Kim might be running a close 2nd in the Muse department (Kimble not Zolciak).

Not for nothing, Kim Kimble is a celebrity in her own right…. so much so that Tabatha Coffey enlisted her as the resident expert for an episode of the Bravo hit show, ‘Shear Genius,’.  Tabatha was to take over a black salon in L.A.,  and probably thought she might need reinforcements to avoid that ass whopping if she went to Inglewood talking crazy…lol.  but I digress, yet again!

Now this is where it gets good….,

When I mentioned the name of one of the most highly sought after and highest paid (and one of my favorites) Celebrity stylist Ted ($700 hair cut) Gibson, …….the proverbial claws came out.  “Well, I feel as though he’s just another gay man using ‘ that’ (meaning gay) stereotype to get ahead” exclaimed Derek Jae.   In other words,  Gibson has harnessed his homo-status to grow his fortunes using a more mainstream model (code for white folks) …” I mean as a business man its great, but on a personal level….I’m not a fan”.

and not only that, but….

Derek went on to say that in his opinion,  “once you reach a certain status as a professional,  you have an obligation to help others.. …if you can.” I can’t say whether this was directed at Gibson…but I can’t say it wasn’t either.   Listen, you can’t take anything away from either Derek nor Ted, they’ve  both impacted the industry in phenomenal ways, just along different paths.

appreciated his candor.  He’s doing it his way and has managed  to….as Tim Gunn of  Bravo’s ‘Project Runway,’ would say….”MAKE IT WORK!”

Look out for Derek Jae’s new show on the oxygen network  called…’HairBattle Spectacular’!

You can still see him as Kim Zolciak’s BFF & Hair Stylist on the next season of Real Housewives of Atlanta.