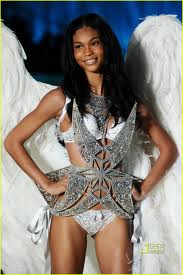 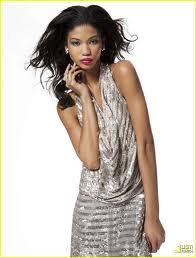 A big CONGRATS!!! to Chanel Iman for being named the NEW FACE of Forever 21’s Holiday Campaign….woot woot!!! As models go, Chanel Iman is one of the youngest and most successful African-American models in the world, thanks to her aunt who recognized her star power at 13 years of age.  Skimming through pictures of Chanel dating back to her childhood, its pretty easy to see ….as Eric Wilson, the New York Times journalist opined, ‘ she was a Model from day 1’.  Her look is flawless, fresh and young; if  Tyra and Naomi had a baby it could only be ‘Chanel Iman’.  Her name alone represents two of my favorite things; Chanel handbags and Iman (no last name needed).

Born in Atlanta and raised in Los Angeles, this hometown beauty owes her exotic looks to her Afro-Asian heritage, her father is African-American and her mother is  Korean and African-American.

With a net worth of over eight million dollars, Chanel Iman Robinson has walked for designers and fashion houses that EVERY girl wants in their closet; Christian Dior, YSL, Louis Vuitton, Oscar De La Renta , Michael Kors, Balenciaga, Galliano, Tom Ford, Givenchy, D&G, Ralph Lauren, Hermes etc.  Hand picked by the grande diva herself, Anna Wintour,  Chanel was the youngest model to grace the cover of Vogue Magazine in 2007.  Since then Chanel is  nonstop, twice on the cover of Teen Vogue, TIME, i-D, Muse, Elle (UK) (Italy), POP, Lula, Flare (Italy) (Canada) and Korean Vogue.  Editorials too many to count but in the most coveted  rags such as Italian Vogue, Allure, Harper’s Bazaar, V and Interview.

At the end of the day, my favorite campaign of Chanel’s career is as a little chocolate  Angel, that’s right!…..Victoria Secret.  Like Tyra and Naomi before her, Chanel’s life size photos in every mall in America give brown girls hope, pride and WINGS.